We look at planes differently than other forms of transportation. When you’re in a plane, everything has to be in flawless working order. It’s nothing like your first car. So, pretty much everyone takes airplane construction, maintenance and repair seriously. And maybe you don’t think about it often – but when you do, you count on near perfection. And that mentality is a big part of why aerospace companies – such as Deerfield, Florida-based Aero Precision Repair and Overhaul, Inc. (A-PRO) – demand efficiency.

A-PRO services Falcon, ATR, Piaggio, Sikorsky, Eurocopter, and Embraer aircraft. It’s likely you’ve seen or ridden in one of these, even if you didn’t know it by its manufacturer’s name. And while just about every flight component is vital to safe operation, A-PRO specializes in repairs and overhauls of landing gear, hydraulic components, flight controls, wheels and brakes – all critical parts. 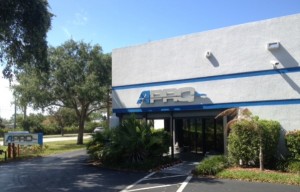 Integral to getting where they are today is A-PRO’s commitment to both stellar customer service and fast servicing turnarounds. Whether a client requires a 1-day turnaround on a functional check or a 21-day turnaround on landing gear overhaul, A-PRO delivers – thanks to their highly skilled professional employees and 40,000-square-foot world-class facility.

And yet, A-PRO had a situation that presented a challenge to ensuring they could maintain their service levels going forward.

A-PRO was running out of space. Their traditional storage method of seven-foot-tall shelving was taking up too much space and was not allowing them to utilize unused overhead space. Although their building had the large amount of floor space necessary to store the wide diversity of parts and materials required to operate their business, it forced order-picking personnel to do a massive amount of walking to pick orders as they trekked along aisle after aisle with pull carts and stepladders. The company realized that the growth resulting from their continued success was beginning to affect efficiency. Picking was a slow process that included a lot of bending over and stretching to get items that weren’t within easy reach. And floor space was at a premium.

According to John Bennett, A-PRO’s materials manager, the central issues were reducing the shelving footprint and improving pick speed and efficiency: “We’ve got too many parts spread out all over,” was his summation. Bennett added that A-PRO was “specifically trying to improve space” and create a smaller footprint of stored materials.

So how did A-PRO solve their problem? By contacting Outsource Equipment Company and having them provide cost-effective material storage solutions. 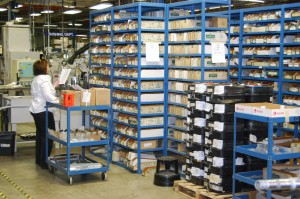 A-PRO laid out their objectives:

Outsource Equipment was able to provide two small-footprint vertical lift modules (VLMs) that provide automated storage and retrieval. And because A-PRO didn’t want to waste money, they selected pre-owned equipment and paid a fraction of what the equipment would have cost new.

The VLMs employ a system of trays designed to bring a specified inventory to a worker on electronic command, quietly and smoothly. They deliver items quickly and directly to the operator, reducing wasted travel time and aisle space. They also eliminate hunting for products and provide excellent space utilization.

A-PRO now utilizes the equipment to reduce storage space and to provide a better organized storage system. The system includes software that provides inventory and tray space cube management, and optimizes the picking of customer orders. In addition, the operator is now shown exactly which bin in the tray to pick from, reducing part searching time. A picture of the part to pick is displayed on the computer screen, which improves accuracy and overall worker productivity. All told, this vertical storage system provides 60% space savings and an additional 60% savings in worker productivity.

What’s more, the VLMs met all of A-PRO’s requirements: