Foreboding tunnels, rickety mine trains and crotchety old prospectors. That’s what most people think of when they envision a mine. Mines are the stuff of the unknown; sometimes scary, sometimes mysterious. But at the Carthage Underground, a sprawling former mining operation space in Carthage, Missouri, the reality of life at a former mine is vastly different. Here, hundreds of warehouse and office employees spend their days below the Earth’s surface. There are even rental facilities for special events and a private tennis club. 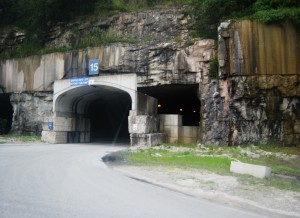 The entrance to the Americold underground storage and distribution facility.

Most of the land above and below ground at Carthage Underground is owned by Atlanta, Georgia-based Americold, a global leader in temperature-controlled warehousing and logistics. Americold’s Carthage warehouse operation is indeed impressive, with 69 truck doors, rail service and refrigerated docks. In addition to temperature-controlled warehousing, the site offers blast freezing, labeling and pre-ticketing, inventory management, pick and pack, manufacturing support and USDA inspection, just to name a few of their value-added services.

All told, Americold has 2.8 million square feet of storage space at its Carthage site. But the challenge was being able to take full advantage of the cavernous vertical space – all 28.8 million cubic feet of it. 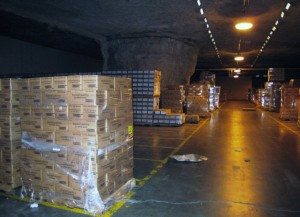 Americold BEFORE, bulk-stacking on the ground

“Before we did this project, Ameircold was bulk-storing all of their pallets on the floor,” recalls Mark Smith, president of Outsource Equipment. “It’s an incredible space. It’s 2 million square feet divided into different areas; you may have a 100,000-square-foot room, a 150,000-square-foot room, and so on,” he says. “A problem they had was that they would have product that may not be able to be bulk-stacked. Even though it was freezer product, it may be pies,” he explains. “Although they’re frozen, you don’t want to bulk-stack them. You definitely don’t want to compress them.”

As a result, Americold could only stack two-high most of the time, and some of their product couldn’t be bulk-stacked at all. “So they weren’t getting very good space utilization,” Smith notes. “And double-stacking means a lot of double-handling.” 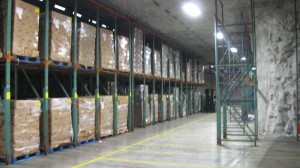 Americold AFTER, with pallet rack from Outsource Equipment

But Smith and his team were able to come up with some pretty impressive pallet racking solutions for Americold. “Before we came, they were only able to store about 4,000 pallet positions – and even some of those weren’t working out very well for them because of the double-stacking; they were having some product damage,” Smith states. “We essentially doubled the amount of their pallet storage in there, creating 6,872 pallet positions of drive-in and selective pallet racking in four different underground freezer rooms. And with the racking, they now are able to choose the pallet they need without the double-handling that occurred when they were double-stacking.”

Creating this solution for Americold wasn’t a walk in the park, though, because this isn’t a typical warehouse space.

Smith adds that because of the dimensional irregularities, Outsource Equipment would have to stop putting in the standard three-deep pallet racking at certain points and change to two-deep pallet racking. “They had a lot of rooms that weren’t what we would consider tall – maybe around 15 feet high or so,” he says. “We were putting in 14-foot-tall racks, and in some places we’d have to trim them down because the ceiling wasn’t high enough in spots. It was very inconsistent.”

Another challenge was that pallet racking is normally installed into concrete flooring. The Americold floors, though, are asphalt over top of packed gravel. Instead of the typical four- and five-inch-deep, half-inch-diameter racking anchors, Outsource Equipment had to employ 10- and 12-inch-deep, three-quarter-inch diameter anchors. “It was a very different application and quite a challenge.”