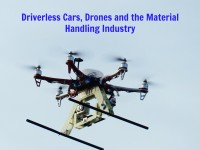 With US legislators again calling for stricter guidelines concerning drones, the topic couldn’t be timelier. What’s more, the media seem to have a love/hate relationship with drones. One minute news outlets are touting Amazon’s distribution plans to use the devices – and the next they are decrying drones’ impact on privacy concerns and airplane flight safety.

Regardless, drones currently are being employed primarily for asset monitoring in the agriculture, oil and gas, and mining industries. MHI states that within five years, drones will be a standard operating procedure in many industries, and that by 2017, 20% of logistics organizations will be using drones for monitoring, searching and event management.

Driverless – or self-guiding – vehicles seem a bit further far off, perhaps in no small part because of our driver-focused culture, at least in part. But according to MHI, self-driving vehicles will make up about a quarter of the entire passenger-vehicle population in mature markets by 2030.

Prices Going Down, Implementation Going Up

Of course, as technology decreases in overall cost, it becomes increasingly attractive to businesses. That being said, we can therefore expect to see more and more uses of both driverless cars as well as drones working alongside more traditional material handling equipment in the very near future.

The key is not to be left behind.

Check out this video and others related to the material handling industry at videos.mhi.org/home.

Did you know that automated storage and retrieval systems (AS/RS) and vertical lift modules are bringing emerging technology into material handling today – and at surprisingly affordable prices? If you’re out of space or just would like assistance in figuring out how to maximize emerging technologies in your warehouse, distribution center or factory, contact Outsource Equipment Company today at 877-422-9144.